A couple of years ago I found an old steel 10 speed bike frame at a local rubbich recycling depot. It was in a reasonable condition, although it was without wheels or a handlbar setup. The barely attached deraillleurs were rusted out, and the cranks were badly oxidised. I could just make out the brand "Repco" on the downtube, and the word "Traveller" positioned forward on the top tube.
The paintwork was poor and beyond repair so I had it powder coated French blue. I initially built it up as a freewheel singlespeed and fitted a chromed front fork that I got for $15 from my local bike shop along with:
27 x 1 1/4 Velocity rims,
Miche high flange hubs,
Nitto B123 chrome drop bars,
Campagnolo record headset,
Brooks antique B17 special.
I enjoyed riding it frequently for about 6 months or so, here it is pictured below. 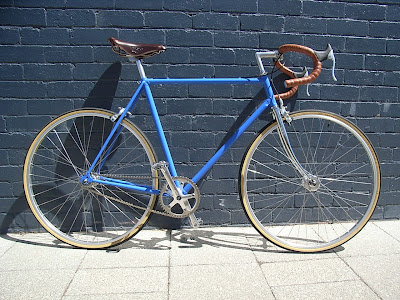 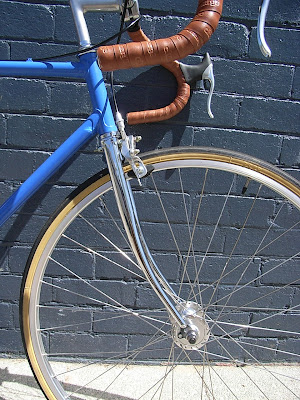 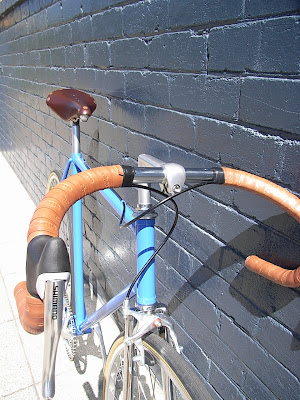 After 6 months of riding the singlespeed I came across two things:
1.   A website called the Old Ten Speed Gallery (OTSG) located at  http://oldtenspeedgallery.com/
The OTSG site rekindled my affection for 10 speeds. It's a great site with many ten speed brands represented.
2.   A near new﻿ Shimano 600 Arabesque 10 speed groupset from the early 1980's - Shimano 600 6200 series.
The beautiful Arabesque groupset was exceptional - very retro, it was almost complete....the only parts missing were the headset, and brake levers. Just to remind you of the series here is the Arabesque gear lever: 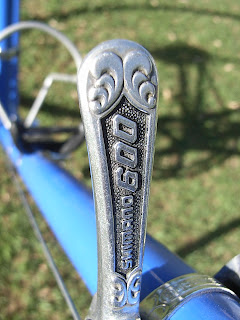 I was bursting to fit the goupset to a bike......so I dismantled the Repco singlespeed frame.
This frame was ideal for the project....it was from the same era (early 80's) and the specs of the frame suited the groupset perfectly. I had a friend build up some new 27" wheels with the Arabesque hubs and slowly pieced the bike together.
The only disappointment was that I could not get hold of any "Repco Traveller" decals, so I banded the seat tube with white and gold vinyl strips and added a badge of my own.
Here's the finished product:
﻿
﻿
﻿ 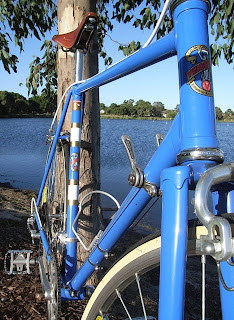 ﻿I've been riding this build regularly for about 12 months now, and although there are only 10 gears to chose from it rides and handles beautifully. The gears are smooth, the brakes are reasonably efficient, and the looks are great. The Brooks saddle, as usual, is excellent!
Gotta love those ten speeds.....
Until next time...safe riding.
James
Posted by James at 7:50 PM