I've always liked Raleigh bicycles, more for their link with British cycling history really. It seems that most of the significant events of British cycling history are somehow connected to the Raleigh brand. I derived much pleasure from my 1974 Raleigh Tourist DL-1 featured on an earlier post, and thought I'd like to have a 10 speed from the same era.
A couple of months ago I was lucky enough to come across a 1972 Raleigh Super Course frame. The frame was fitted with the original headset, Brampton bottom bracket and Stronglight cranks. Luckily the coffee coloured paintwork was in very good condition, so after stripping the bike, all I had to do was clean it down, polish the chrome, regrease, and reassemble the parts. Here is the frame as I received it:
﻿﻿
﻿﻿ 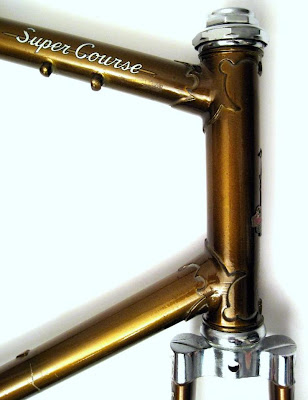 As you can see it is in a very good condition, and the frame is straight with no dents or cracks. The "Nervex" lugwork is exceptional. The coffee colored paint is good, apart from a few small chips and scrapes, which is fine considering the bike is 40 years old. I don't think that the bike was ridden much at all, as there is no wear on the frame that indicates extended use.
The decals were good, although I'll need to replace the Reynolds 531 decal that has almost disintegrated. H Lloyd Cycles located at http://www.hlloydcycles.com/ are the official suppliers of Reynolds decals so I'm sure that I won't have a problem sourcing another.
Since getting the frame I've had a look at the original specs contained in the 1972 Raleigh catalogue and I've been trying to source as many of the original parts and components as possible. Here is the page of the catalogue that displays the bike:
﻿
﻿A great photo from the early 1970's.......nice bike, shame about the dress sense!

I recently acquired a suitable NOS GB stem that was identical to the stem that was originally fitted to the bike. Here it is.....it's amazing what you can find if you look hard enough! 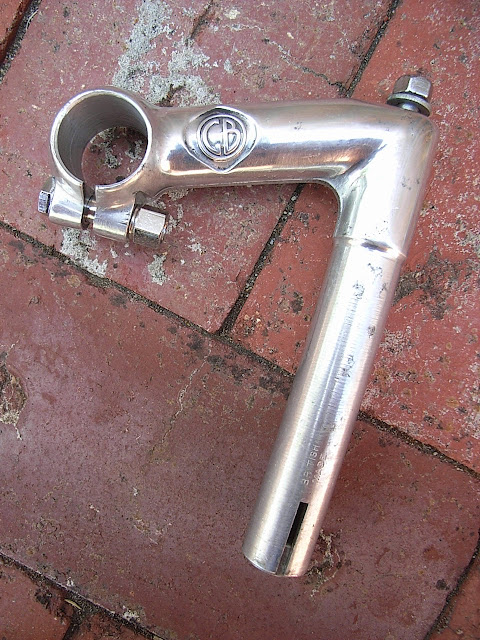 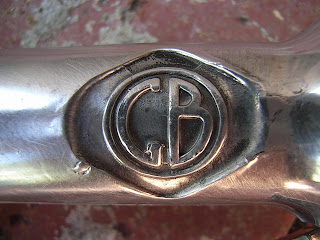 I love the Gerry Burgess (GB) components from the 60's and 70's. It's good to see that they might start manufacturing some new GB components in the near future!!
As per the 1972 Raleigh catatogue, the original bike was fitted with a Simplex gearing system - consisting of Simplex gear levers, front derailleur and rear derailleur. I have not read many positive things about Simplex gearing so I've decided to source a Shimano 600 Arabesque set. This set is circa 1980's, and although not strictly from the correct period, it will definitely suit the build. Here is the set:
﻿

So all I need to do now is source some 27 inch wheels, a Weinmann Vainqueur 999 centre-pull brake set, a Brooks saddle, and some suitable handlebars, all of which should be easy to find.
Once I've built the bike I'll post it as Part 2.
Until then, ride safe.
James
Posted by James at 4:46 AM