I joined the Western Australian Historical Cycle Club last year and went along to a couple of their informative meetings to get a feel for the club. A great bunch of  bicycle fanatics (of the more mature variety) with loads of knowledge on bicycle history and restoration.
Whilst there I met a guy named Peter who had been collecting and restoring bicycles for (many, many) years. His interest was mainly in Australian built machines, particularly those that were built in the Perth area between the 1920's to the 1960's. I went and had a look at his collection a few days later and was blown away with the fantastic bicycles he had restored, amazing beautifully kept machines from the past....restored and cared for perfectly!!
I inquired with Peter as to what he had that I could take up for my next restoration project and he wheeled out the old rusty Elswick pictured below. 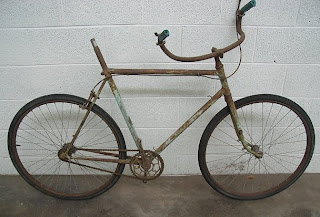 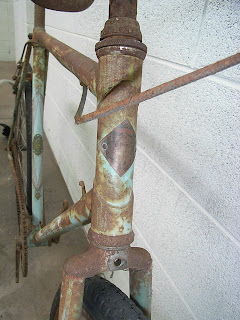 I was particularly drawn to the bike because of the old rusty chainwheel that had "Elswick" lettering contained within the ring (above centre). I did some research and located a website where I was able to date the bike using the serial number on the frame, and determined that the frame had been bulit in England in 1949 (by Elswick-Hopper).
After photographing the bike and stripping it down I had the frame powdercoated black. The metal tubing had a fair bit of surface pitting, but rather than fill the pitting in I though I'd just powder coat over the whole frame 'as was' to retain the old feel of the bike. I photographed what remained of the decals so I knew what to look for when searching for replacements.
I re-chromed the metal parts that I couldn't replace, including the "Elswick" chainwheel that came up a treat (pictured below). Some restorers prefer to polish older parts, which does look good and is probably more authentic........but quality re-chroming looks great (although expensive!!). 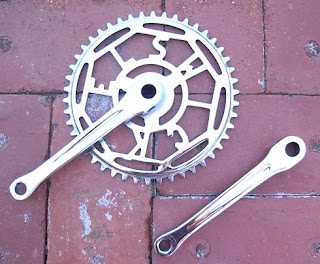 I found some new chromed 26 x 1 3/8 Westrick rims (a set of 32/40 spoked - hard to come by) and had George (my bike man) lace them up to new hubs as per the original specs of the bike. I also located an original NOS Sturmey Archer 18T freewheel for the rear flip flop hub - and chromed an 18T sprocket for the fixed side of the hub - as per original.
The mudguards for this bike were fantastic - all aluminium, which was quite advanced for its day. Aluminuim had been developed and refined for the war effort in the early 40's, so after the war had finished the cycle industry started to use aluminium (and similarly Hiduminium) when manufacturing their cycling components. These mudguards were in excellent condition and polished up really well.
I assembled the bike, although I opted for a touring handlebar instead of the drop bars that were originally on the bike. I planned to eventually give the restored bike to my dad and felt that the touring bars were a better option for him.
I initially re-fitted the "Elswick" chainwheel, however, the inside of the crank arms where the cotter pins sat were well worn and couldn't be easily fixed - a pity really because the re-chromed chainwheel looked great and I was looking forward to using it. I hunted around and found a nice 46T Raleigh chainwheel from the 60's that fitted well and ran smoothly.
And so the finished build........ 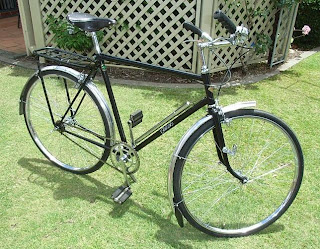 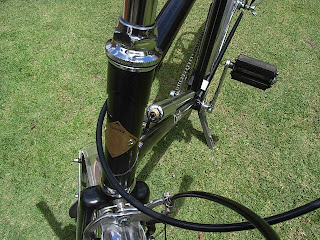 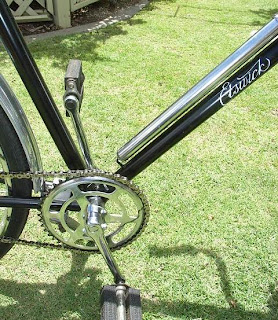 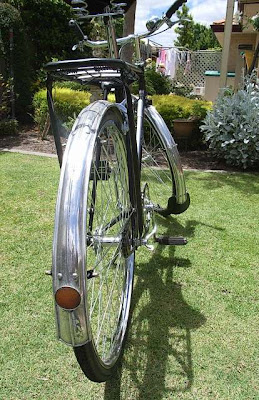 ........and of course it would not have been complete without a new Brooks (B67) saddle with chrome springs (although not original) that I had laying around - the bike looked great and rode very smoothly.
﻿﻿
I hunted around, mainly on the internet, for replacement Elswick decals, but I had no luck with locating copies of the original styled decals. I contacted www.hlloydcycles.com and located some Elswick decals, although they certainly weren't as appealing as the originals. Lloyds were very helpful, I would recommend them to anyone chasing down old replacement English bicycle decals. 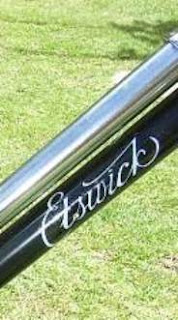 So the bike was done.....and on fathers day 2010 I handed it to my dad as a father's day gift. He's been proudly riding the shiny beast around his retirement village in Perth, and often receives pleasant comments about the bike from interested onlookers.
﻿﻿﻿﻿ ﻿
My work was done here....it was time I started looking for my next project!!
Posted by James at 4:56 AM