I've finally finished building my 1972 Raleigh Super Course!! It's taken a while but it's all together now and is running like clockwork.

After looking at the factory specs from a 1972 Raleigh catalogue I obtained most of the manufacturers original equipment as NOS (new old stock) parts through eBay. I did, however, make a slight deviation from the original specs when it came to the gearing system. I wanted something more reliable than the original Simplex 10 speed system that is clunky at best.

Although not original, I chose to use another Shimano 600 'Arabesque' groupset for this bike. It's a fantastic early 1980's groupset that I've had success with on other builds. Although it's a 30 year old groupset it's smooth, reliable, stylish, and the parts are still relatively easy to obtain. It's easy to fit and adjust and compliments any build with it's good looks.

Here are some pics of the build.... 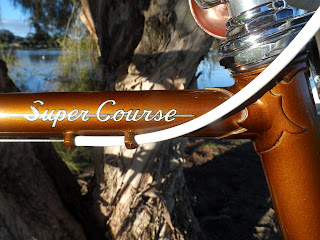 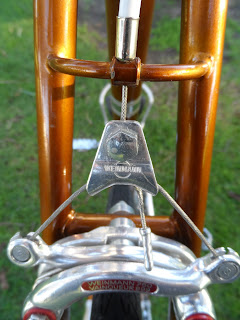 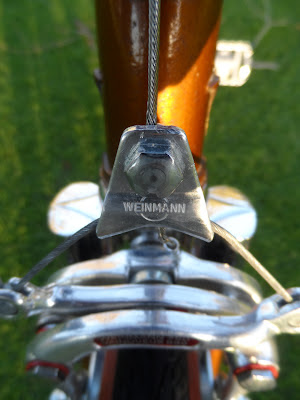 The bike has 27 x 1 1/4 Velocity aluminium boxed rims that are laced to Shimano 600 hubs, both front and rear. I've fitted those fantastic Panasonic Panaracer Pasela tan walled tyres.....althought they are hard to source in Australia they are very nice tyres and well worth the effort no matter where you live.

After initial adjustments to the brakes and gearing systems the bike now runs beautifully. I have taken it on a couple of group rides already and had no problems keeping up with the other riders. Although the bike is quite heavy it is still a pleasure to ride. The Reynolds 531 tubing is very smooth and absorbs most of the impact from uneven road surfaces.

I am very surprised with the efficiency of the Weinmann Vainqueur 999 centre pull brakes. It was a bit difficult adjusting them correctly at first, but once adjusted they work really well. Their braking capabilities are very sure and predictable. When softer rubber pads are fitted they also stop well in the wet.....very impressive!!

I have some holidays now and so I am looking forward to clocking up a few miles on the Super Course.

Until next time, ride safe.