Due to it's poor economy and massive population, the quality of personal transportation throughout Indonesia has not progressed rapidly. The island of Bali, a popular tourist destination for Australians, presents a typical example of Indonesian transportation conditions. The public transport infrastructure is poor, the road quality is generally terrible, and road safety and driving conditions are always chaotic.
Small vehicles are prevalent on Balinese roads, however the majority of personal transportation is on scooters. Scooters, scooters, and more scooters......every intersection choked with locals on scooters conducting their daily business. It is normal for a local Balinese family to rely on the scooter for family transportation and a regular sight is of dad, mum, and two small children huddled up on the seat of scooter making their way through town going about their business.
﻿
﻿

On the island of Bali many older locals still rely on bicycles for their primary mode of transport...bicycles which they have personally owned for a long time - probably since new! Older bicycles that reflect the designs of English bikes of the the 1930's and 40's. Steel frames, chromed rod caliper brakes, with old leather saddles, that usually roll along on rusted 28 inch Westwood rims.
﻿

Having an interest in vintage bicycles I am interested to see that the old bicycles I have seen are used so commonly. After all they are usually 40 to 60 years old - maybe even older. So this presents a few intersting factors for me:
Part 1 of this article will have a look at what brands they are and how old they might be, and Part 2 will have a look at the spare parts issue.
The old bicycles are frequently observed being ridden on the bumpy roads trying to make their way through the chaotic maze of scooters. Some of the riders use their bikes for personal transport, and others use their bikes as a tool of trade, often carrying produce on panniers connected to a rear rack.
﻿

Due to the poor physical condition of the roads throughout the island of Bali, riding a modern carbon road bike with 700C tyres would be treacherous to say the least. The road surfaces are in poor condition and this would cause a modern tyre to puncture very easily, an expensive carbon frame would not last long in these conditions....and clipping in (clipless pedals) would not be an option due to the chaotic traffic conditions where unexpected stops are frequent.
The only modern bicycles I have sighted are 'Polygon' brand mountain bikes that have robust 26 inch tyres and solid aluminium frames. Even these bikes are not common - poor roads and chaotic traffic discourages many from riding bicycles! In fact I'm even surprised to see the vintage bicycles being ridden around...they may be robust but the traffic is crazy!
After having had a look at the manufacturers marking on the vintage bikes I have noted that the majority carry the "Phoenix" brand. The giveaway is the PHOENIX lettering contained within the chainring... this identifying feature is quite reminiscent of the old Engish bikes that also carried their brand name or symbol in a similar fashion ie BSA, Raleigh, Hercules.
Here is a typical Balinese vintage that carries the classic PHOENIX chainring:
﻿
....and another Phoenix below.
﻿
﻿
﻿

Phoenix bicycles originate from the Shanghai Bicycle Company which was born in China in 1958. Phoenix still manufacture "vintage" styled bicycles and even today supply a large range of vintage styled bicycles throughout Asia. These vintage designs are still popular and sell in large numbers. Have a look at:
http://www.phoenix-bicycle.com/phoenixie/page/Products.asp?id=230
These bikes are really copies of the old English classics that were originally designed in the 1930's to suit the English road conditions of the day and the English economic climate of the time. Unfortunately similar conditions still prevail throughout many countries within Asia;
...a modern lightweight expensive design can't compete with these requirements so you can see why the vintage styling is still the preferred choice not only in Bali, but throughout Asia.
Here's a couple of more images of old bikes and their owners I captured from my last visit...
﻿
﻿
﻿﻿﻿
﻿﻿﻿﻿﻿

..........and of course a visit to Bali would not be complete without finding a (brand) copied item of some sort. Here is an old men's steel classic that carries a Raleigh styled headbadge and is pretty much a copy of the old Raleigh DL-1 Tourist that I featured in an earlier blog. 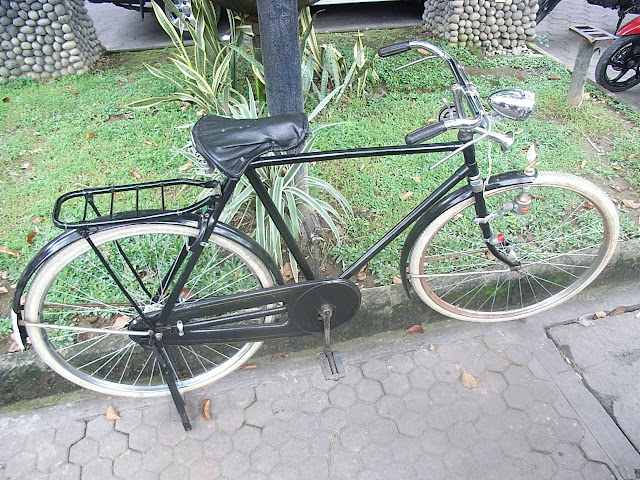 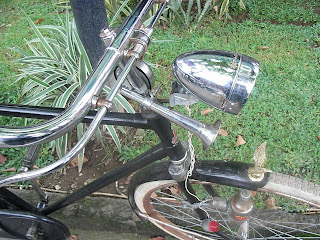 OK......so these vintage bikes in Bali may not be that old after all, they just look old!! We all know how a bike can quickly deteriorate if it is kept in the open air near the ocean exposed to the salt air for a few years!
Phoenix manufacturers started making vintage English styled bicycles in 1958 so alot of these bikes may well be old, but without the ability to record and research frame serial numbers (if they indeed have any) it woud be very difficult to accurately age a vintage styled bicycle in Bali.
There are plenty of old vintage styled bikes in Bali...so where do they get their spare parts? Can I get some? I'll cover this and more in the next installment.
Until next time, safe riding.
James
Posted by James at 7:29 AM